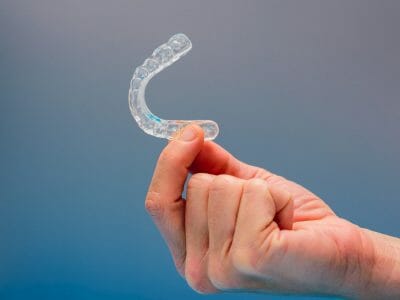 What is a nightguard?

A nightguard sometimes called a bite guard or mouthguard is an oral device made of clear plastic that is molded to your teeth and used to protect against damage caused by sleep bruxism or teeth grinding, a condition that causes pain in the jaw and may affect your ability to chew properly. A night guard may also be prescribed to treat those with obstructive sleep apnea (OAS) since about 25% of OAS patients also suffer from bruxism.

What is sleep bruxism?

Sleep bruxism is the medical term for teeth grinding, a common condition that affects both children and adults. Bruxism causes damage to the teeth and sometimes to the jaw as well as patients clench their jaw while sleeping and grind their upper and lower teeth together. Some patients even grind their teeth during waking hours, but it typically intensifies while sleeping.

If left untreated, bruxism may interfere with sleep, because teeth grinding may make enough noise to disrupt either the patient or their sleep partner. Over time, bruxism may also damage the teeth and gums by wearing down tooth enamel and shifting teeth from their proper positions, causing mobility and instability in teeth.

Bruxism may be caused by several factors, such as:

The causes of bruxism vary, but the condition affects both children and adults. While bruxism may occur due to an underlying problem such as an earache or jaw pain, emotional conditions such as stress and anxiety may also trigger tooth grinding during sleep, and even during waking hours. In some cases, the condition is caused by problems with malocclusions or problems in jaw alignment that affect the bite, or the top and bottom teeth may not meet correctly when the mouth is closed.

A recent study published in the US National Library of Medicine estimated that an average of 8 percent of adults and as many as 20 to 30 percent of children in the United States may be affected by sleep bruxism.

How can bruxism be treated?

While in some cases, orthodontic treatment may alleviate bruxism, in other cases, a nightguard may be prescribed as a barrier to prevent the upper and lower teeth from meeting so that it becomes impossible to grind them.

If you’d like to learn more about how you can control bruxism, contact our office, and schedule an appointment.